A diverse range of professionals made up the Founding WasteAid Australia Board, drawing on experience in fields including not-for-profit, Aboriginal affairs, waste management, social enterprise, governance, strategic planning and international development. In the transition to Community Resources in 2018, a representative will be appointed to the Community Resources Board. Jack Beetson became Chair of the Board on 1 July 2016. A Ngemba Aboriginal man from western NSW, Jack has been actively involved in Indigenous education and development in Australia and internationally for over 30 years. Among the roles he has played are: Executive Director of Tranby College in Sydney, Australia’s oldest independent Aboriginal community-controlled college; the Foundation President of the Federation of Independent Aboriginal Education Providers; a member of the MCEETYA Task Force on Aboriginal Education; a member of AITAC, the Australian National Training Authority’s Advisory Council on Indigenous vocational education and training; member of Australia’s non-government delegation to the UN International Working Group on Indigenous Peoples; the Indigenous representative in Australia’s delegation to CONFINTEA V, the UNESCO world adult education conference in 1997; a participant at several of the World Conferences on Indigenous Education; a member of the UTS University Council and Southern Cross University Council; and founder of the Aboriginal Philosophy Farm. Since April 2009, he has held an Adjunct Professor appointment at the Centre for Agriculture Law at the University of New England in recognition of his contribution to the university and to the development of policies and programs for Aboriginal development.He has provided policy advice to NSW Ministers of Aboriginal Affairs, Education, Health and Housing and to the Parliamentary Secretary on Aboriginal Affairs since 1980s. His analysis and advice on policy issues has been sought by Directors- General of the Departments of Aboriginal Affairs, Community Services and Health. In recent years, he has been a consultant to government on Aboriginal affairs, children’s services, education and natural resource management; to Macquarie Bank, on land purchasing for NSW Aboriginal communities; to Multiplex, Citigroup and Sydney Rotary on Aboriginal issues; and to the University of New England. He has been a consultant to two international projects run by the University of Lancashire in the UK, on benefit sharing and Indigenous people’s rights in relation to the commercial exploitation of traditional environmental knowledge.In 2000, he was recognised as a United Nations ‘Unsung Hero of Peace’ for his work on Reconciliation, a decision acknowledged by unanimous vote of the NSW Legislative Assembly in March 2001. In May 2013, he was appointed the first Executive Director of the Literacy for Life Foundation, a national Aboriginal-led organisation set up to roll out a national Aboriginal adult literacy campaign, using the Cuban Yes I Can model. This work is now underway in communities in western NSW, with support from Commonwealth and State governments and the private sector. Jack’s Aboriginal education and development company, Beetson & Associates, has also recently completed consultancies for Commonwealth FaHCSIA, Aboriginal Affairs NSW, the NSW Office of the Registrar of the Aboriginal Land Rights Act, and Murdi Paaki Regional Enterprise Corporation. John is Director of the Nolan Consulting and a former director of the Sustainable Resource Use, the Oaktree Foundation and ECO-Buy Limited; both of the latter two organisations being national not for profits. He holds a B.Eng., a M. Eng. Sci., and a Dip Ed (sec). He is an EPA accredited environmental auditor for industrial facilities and natural resource, a member of the AICD, Consult Australia, Engineers Australia. He has experience in corporate governance, strategic planning, business management, and building and maintaining technical excellence. As a consultant John provides technical, commercial and stakeholder advisory services on water and environmental matters to public and private sector clients. He has particular expertise in the development and independent review of State and National sustainability programs involving a diverse mix of stakeholders as well as the evaluation of organizations with environmental and water responsibilities. Dr Bandler has worked in general practice for many years. Most recently, as a GP she has provided fly-in-fly-out services for the Royal Flying Doctor Rural Women’s GP Service, to rural New South Wales.
She has been involved in medical education for many years – across the healthcare sector. She currently works for the Sydney Medical School. As Associate Dean (Indigenous) she is involved in teaching medical students about Indigenous health in Australia, in supporting Aboriginal and Torres Strait Islander medical students in the course, and in working with Sydney Medical School to address its role in working to improve the health of Indigenous Australians. She is the daughter of a civil design engineer whose passion was water: its storage, use, drainage and history. Even after all these years, she still likes seeing patients, still enjoys teaching, and still likes to visit dams and reservoirs. Suzanne Jones was the founding Chair from Waste Aid’s inception until July 1 2016 when a new Aboriginal Chair was appointed. Suzanne brings expertise in planning and development, environment and sustainability, and organisational transformation and business growth to the Board. Suzanne has held senior executive roles involving strategic planning, major project delivery, public-private partnerships and stakeholder management. Suzanne’s previous Board positions include the NSW Public Transport Authority, Parramatta Rail Link Company Pty Ltd (which financed and constructed the Chatswood to Epping underground railway and the Parramatta Transport Interchange), Newcastle Urban Renewal and Transport, the Illawarra Regional Information Service and Garrigal Housing. She has undertaken a business leadership course at Harvard and was also awarded an international leadership fellowship by the United States government. Suzanne is currently the Chair of the NSW National Parks and Wildlife Advisory Council and the NSW Conservation Audit and Compliance Committee. She is also a Director of TransGrid, University of New England Partnerships Pty Ltd and Disabled Wintersport Australia. Belinda Duarte was born and raised in Ballarat Victoria and is a descendant of the Wotjobaluk people and the country of Poland. As a qualified teacher and a former elite track & field athlete Belinda’s passion for sport is evident through her personal and professional life. Her professional experience involves extensive work on boards and in managerial roles with young people, Aboriginal communities, sport & health and pathway programs in education, training & employment. Within the AFL Industry she led the development of the Indigenous Employment Program with AFL SportsReady building pathway for young Indigenous people across the country into traineeship and career pathways.
More recently in her current role as the inaugural Director of the Korin Gamadji Institute based at Richmond Football Club she was awarded ‘Football Woman of the Year’ in 2012 for her leadership in establishing a facility which provides leadership, accredited training and career pathway programs for young Indigenous people together with pathway partners. Belinda believes at the heart of effective leadership is authenticity, commitment to equality and a relentless focus on a vision which inspires you.

Anne is the Founder and Director of Waste Aid after a career spanning more than 30 years’ in environmental health and waste management at local, regional, state and international levels in Australia, Europe and Asia whilst employed in local government, industry, commercial and the community sectors. In 1997 Anne started her own waste consultancy A.Prince Consulting which has delivered over 650 projects including world best practice strategies and solutions throughout Australia. From 2007 – 2011 Anne worked with 13 remote Aboriginal and Torres Strait Island (ATSI) communities developing and implementing fit for purpose waste programs which provided the unique insight into the current issues common to these disadvantaged communities.
In addition to her consultancy practice Anne was the inaugural Chief Executive Officer of the Australian Council of Recyclers (ACOR) from 2002 – 2009, member of the Board of Zero Waste South Australia 2009 – 2011 and voted by her peers and colleagues as the industry leader in the Resources and Waste category of the Waste Management and Environment Media Leaders List in 2010. Her experience working in ATSI communities provided the inspiration to turn passion into purpose and her drive and tenacity has seen the establishment and growth of Waste Aid. John Weate is founder of Community Resources Limited, a not for profit community development association, charity and Public Benevolent Institution specialising in social enterprise. Social enterprises are commercially viable businesses with a purpose of generating social impact. Enterprises founded include Tobwabba Art, an Aboriginal art and design studio which won the National Tourism Award each year from 1996 to 2000 and the Aboriginal Employer of the year award in 2001. John founded the Resource Recovery social enterprise in 1991, which has won awards for waste management excellence and won the inaugural Australian Social Enterprise of the year award in 2013. For 25 years John has been a Local Government Councillor on Great Lakes Council, where for most of that time he has chaired the Wallis Lake Coast and Estuary Management Committee. The Committee won the Theiss National River prize for catchment management in 2003. John was a foundation director of the Hunter Central Rivers Catchment Management Authority from 2004-2013. The Authority won the National River prize in 2004. John was director and chair of Midcoast Water from 2001-2012. From 2004-2013, John was a founding director of Wateraid Australia, the Australian water industry’s aid and development charity assisting the world’s poorest people gain access to clean water and sanitation. In 2013 John formed a partnership between Great lakes Community Resources, the Centre for Social Impact and The Westpac Foundation to establish Resource Recovery Australia, social enterprise consultants for the waste industry. RRA works with Councils and communities to broker, establish and scale, social enterprises that sustainably manage waste and generate local training and employment opportunities.
John recently became a foundation board member of WasteAid Australia, to address our global responsibilities in the waste industry.
John holds a Bachelor of Science and an MBA.

Anne is the Founder and Technical Director WasteAid Australia after a career spanning more than 30 years’ in environmental health and waste management at local, regional, state and international levels in Australia, Europe and Asia whilst employed in local government, industry, commercial and the community sectors. She is affectionately known as “Dr Rubbish”, a person who delivers results.

In 1997 Anne started her own waste consultancy A.Prince Consulting which has delivered over 650 projects including world best practice strategies and solutions throughout Australia. From 2007 – 2011 Anne worked with 13 remote Aboriginal and Torres Strait Island (ATSI) communities developing and implementing fit for purpose waste programs which provided the unique insight into the current issues common to these disadvantaged communities. Her experience working in ATSI communities provided the inspiration to turn passion into purpose and her drive and tenacity has seen the establishment and growth of Waste Aid.

Elaine has a strong background in education, natural resource management and outdoor and environmental education. She has a dedicated interest in Indigenous Knowledge systems, technologies and ‘ways of living’ having worked in Aboriginal Communities for the last 20 years.

Over a ten year period Elaine worked as a Senior years Teacher in East Arnhem Land working on “Caring for Country” projects and mapping these to the High School Curriculum.

Elaine is very passionate about ‘caring for country’ and assisting to improve our collective sustainable relationship with the environment, particularly through waste education and outdoor environmental education. 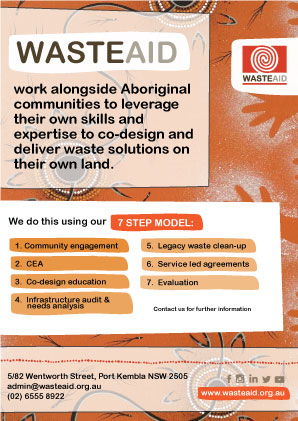